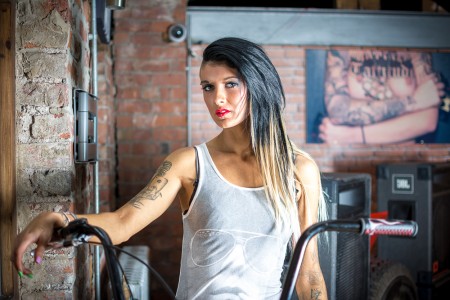 This was an old friend that I had shot in the past you might recognise her form some of my other shoots like the Ladies of the manor, abandoned building and the destroy the dress shoot. Sam was wanting to rebuild her portfolio and was after adding a few new images to add to it. She asked me for a quotation for a shoot knowing I had now started a business in photography. I quoted her my ‘Fun’ package which is £30 for I hour photo shoot 30 watermarked images on a disk.

Sam came up with the idea that she wanted a ‘suicide girl’ type shoot which fits her appearance of the alternative model look, with the tattoos and funky hair. Now all we needed was a location. Sam works for a tattoo parlour Tattitude so after agreeing with her boss we used the tattoo parlour for the shoot which was to be Tattitude in Manchester which is a well presented penthouse shop unit making it the perfect place for Sam’s shoot as the décor was very urban and modern. 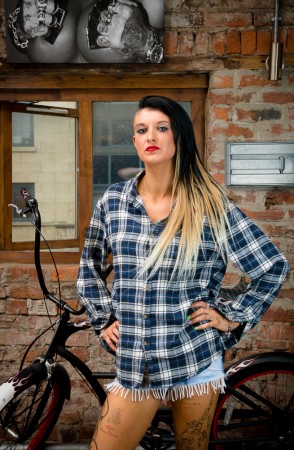 I started by setting up the two off camera flashes using a soft box for one Speedlight and the other used as a fill light bounced off the ceiling. The shop was quite dark with it being in the city and late in the day so Speedlight’s were a definite in this scenario. My lenses of choice for the day was my sigma 18-70mm f2.8 and Nikon 35mm f1.8 which would be bolted to my Nikon d7100 due to the low f Stop and the room not being big enough to warrant the Nikon 70-200 f2.8 while using a flash.

We went through the shoot changing poses and locations with in the room as the room had lots of props and places to sit making it a really good place to shoot. The red brick also gave quite an industrial/urban feel to the images which tied in well with Sam’s tattoos and choice of clothing. 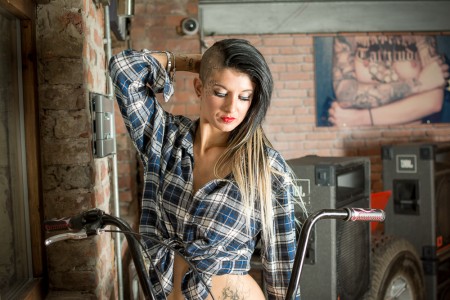 I continued to shoot for the hour getting some great images in camera which made me excited to get back to the computer and edit the pictures from the days shoot. If I was to do the shoot again I would probably want to choose the time of day so I had more light to play with through the windows to add more of a lighter feel to the pictures but apart from that I felt the whole photo shoot was a success.

If you would like the idea of the fun package shoot please see here for more details on pricing and time covered within the price.